What’s the most difficult language to learn? The answer will depend on what languages you know already, but since I’m writing this in English, let’s assume that’s all you know. In that case, there’s a handy database maintained by the Foreign Service Institute which tells you how long it takes for a native English speaker to learn a variety of languages. It’s hardly exhaustive, but it includes just about every language that could be considered “major”.

The answer to the initial question is Japanese, for the record; restricted to the languages within that database, of course. But, why? There are lots of things one could point to; its morphology, it’s grammar, it’s semantics. But there are other hard languages as well; Arabic is notoriously hard to learn, and yet it’s very different from either Japanese or English. What things, truly, make a language hard to learn? That’s what this post is going to explore.

Throughout this post, I will be making use of two datasets. Firstly, this version of the FSI data put into a nice csv file, and secondly, this database version of the Atlas of Language Structures. With these, one might be able to draw conclusions about what makes languages more or less difficult to learn.

Firstly, some housekeeping! For reference, I will be using Python and the following libraries for my analysis.

The two datasets aren’t completely compatible; as such, some changes need to be made to combine them. I will call the initial difficulty dataframe diffDf, and rename a few entries to make it consistent with the ALS dataset.

I will then load the ALS dataset into a dataframe called landDf.

The ALS dataset includes many languages, several of which are dialects of other languages. Whenever a language is a dialect of another language, it’s denoted “Language (Dialect)”. For instance, Egyptian is listed as “Arabic (Egyptian)”. The difficulty dataset isn’t as granular. I decided to assign each dialect the difficulty of the parent language listed in the FSI dataset.

One might ask at this point, is it really principled to assume that every dialect of a language has equal learning difficulty? No, probably not…

In order to pull off the merge, I wrote a function to detect if a language from the ALS database appears in the FSI database.

I then systematically filter the ALS database, removing languages that don’t have difficulties and adding columns for learning time for everything else.

The ALS dataset contains country codes for each language’s country of origin. With this, the difficulty of languages can be plotted across the world. However, they aren’t in the right format. Some of the languages list multiple country codes. To fix this, I must create a new dataframe with the individual country codes connected to the difficulties.

I start out with a dictionary that I can use to map country codes to languages difficulty. For each listed language and for each country code listed, if the country isn’t already in the dictionary, add it along with its difficulty; if it is, update the mean difficulty.

I now convert the dictionary into a new dataframe by first converting it into an array, then casting it.

A bit annoying, but not too hard. But now I need to plot this out. I need a shapefile for the earth. A good source is naturalearthdata.com. In particular, the 100m data will work fine for my purposes. I will load this data using geopandas. This will give me a large database with lots of columns. One of them, the main geometric data, consists of polygons describing the geometry of various countries. The other column I need is the ISO_A2 column, being one of several columns giving country codes. That one contains the ISO alpha-2 country codes, the same codes that the ALS database uses.

Also, France and Norway’s ISO alpha-2 codes are listed as '-99' for some reason, so that needs to be fixed.

Now these can be merged together.

Row 159 contains Antarctica. Since it just takes up space on my map, I decided to simply drop it.

At this point, I can get on with plotting. In particular, I’ll be plotting two layers. The first layer will plot the available data, the second will plot any country who’s data is missing. 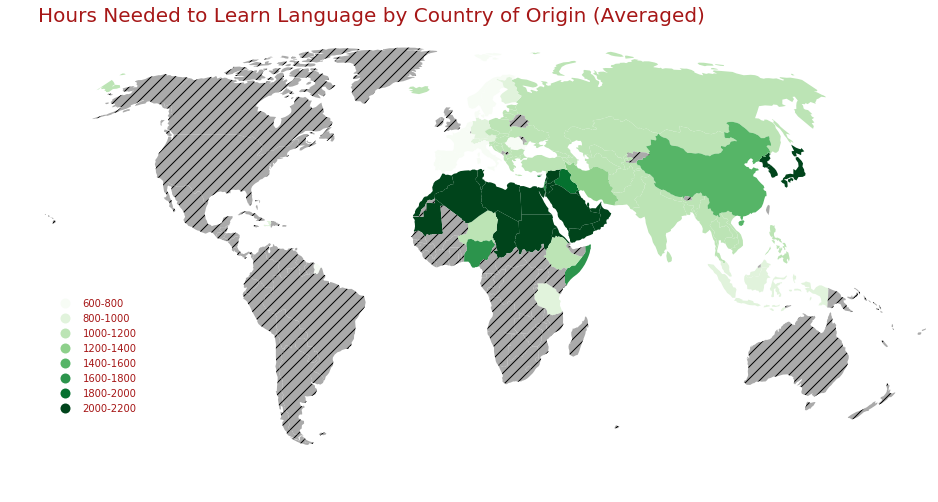 Shoutout to Ramiro Gómez and his helpful tutorial. So many choropleth guides overcomplicate things with interactivity and way too many extraneous libraries, but I found this one to be just right.

From this plot, a few things can be noticed. The hardest languages are concentrated in two places; firstly in the far east within Japan and Korea, and secondly spread throughout northern Africa and the Middle East. That second area is so dark mostly due to different dialects of Arabic. It can also be noted that the easiest languages tend to group in Europe, close to England. Not surprising, as these are where the languages most similar to English are concentrated.

There is also a lot of missing data. Few major languages come from the Americas, Australia, or southern Africa, and, as a result, information on the difficulty of languages from there isn’t as easy to find. Or, at the very least, the FSI didn’t bother to find it.

Which structures are most important when it comes to learning a new language? There are a couple of things that come to mind, the sort of thing people complain about when learning a new language; the writing system, conjugation, the vocabulary, etc. These things appear in the guise of various structures within the ALS database. One of the more interesting of these is grammatical gender; let’s start with that.

The most obvious thing to start with is simply the number of genders in the language. Some languages have over a dozen, while many have none. One might imagine that the more exotic gender systems are harder to learn. This can be plotted to find out. 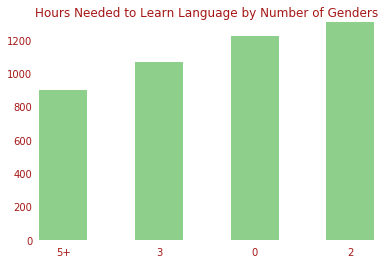 Interesting. The easiest category is the one with five or more genders. That’s quite unexpected. Out of curiosity, I looked at which languages were in this category. As it turns out, there was only one in my list, Swahili. It is apparently fairly easy to learn for English speakers, taking around 900 hours.

Swahili has an interesting system with around 10 genders, depending on how you count them. Some are pretty ordinary, making distinctions between animate and inanimate objects, while some are quite peculiar, such as a gender for artifacts and tools. Interestingly, there aren’t equivalents of masculine/feminine gender. If you’re interested, here’s a rundown.

But what conclusion should be drawn from this? Not much, the trend seems to be a coincidence. There just aren’t many major languages with complex gender systems. As a consequence, trends about related extremes can’t be reliably extrapolated from this data.

The only place where gender plays a clear role in English is in pronoun usage. This made me think, what about Japanese? It uses gender in a way that’s very similar to English. For the most part, it doesn’t really have gender, though it has a few words that are semantically distinguished by sex (海人 (fisherman) and 海女 (fisherwoman), for instance), such examples are relatively rare. Like English, it also genders some of its pronouns, such as 彼女 (she) and 彼 (he). Unlike English, it even has gendered personal pronouns such as 僕 (I, masculine). On top of that, Japanese does grammatically care about things like animate vs. inanimate nouns, something often implemented via grammatical genders. So I looked up Japanese in the atlas to see how many genders it listed. As it turns out, that spot is simply blank. ¯\(ツ)/¯ Japanese’ gendered pronouns, however, are mentioned in a separate column. Graphing that; 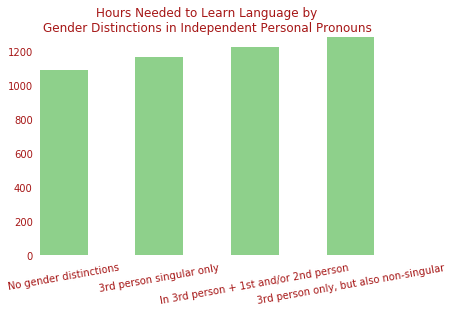 Interestingly enough, there isn’t much of a difference in class hours between the categories. That highest category does include Japanese, along with various other languages such as Polish and Swahili. There doesn’t seem to be much sense in which languages which are similar use gender in a similar way, but the trend does align with my expectation that languages with more sophisticated gendered pronouns would be harder to learn. However, I should test their significance before jumping to conclusions.

As, perhapse, expected, they are not significant. Furthermore, I went through a bunch of different attributes, from subject, object, verb order to negation morphology, and I couldn’t find a single significant result. Hmm, what to do…

Well, let’s stop looking manually, and do things automatically! I wrote this code to perform every t-test possible on all values for every column. It first prints a graph of the data, then it makes a table of t-tests for each combination of values.

With this, I can simply look for small p-values! Of course, let’s consider the fact that this is doing over 100 t-tests. If I cared about p<.05 results, I would expect there to be several false positives. To be more restrictive, I’ll only look for p<.005 results.

The first thing I find is the relation between languages with different words for tea. 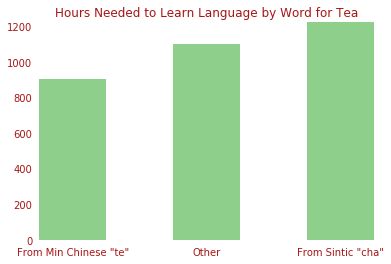 It’s unlikely that having “Cha” as the word for tea makes a language harder. I suspect that this has more to do with history/location than anything. To see this, one can run a χ² test with this vs language genus.

It seems most likely that those languages which happen to be hard for English speakers often share a history which is what really determines this category.

Something that I’d expect to genuinely contribute to difficulty is the handling of nominal vs verbal conjunction. In English, they are the same (“The cat and the dog played and ran”). Some languages use two different words, such as Japanese (“猫と犬が遊んで走った”). 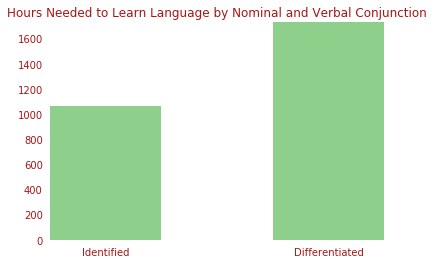 Languages with differentiated conjunction tend to be much more difficult, though I doubt this alone would contribute hugely to language difficulty. 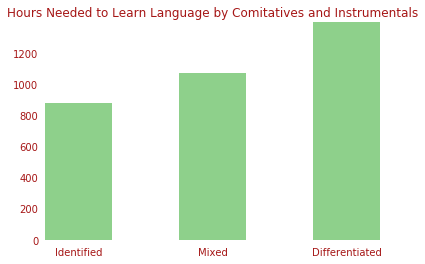 While I’d expect this to matter, again, I doubt this alone would contribute hugely to language difficulty.

Another significant result can be seen with suppletion. This is a phenomenon whereby two paradigms within a language creates irregularities within the language on their interface. The most accessible example is “go” vs. “went”. Both go and the, now-archaic, “wende” (meaning the same thing as go) ended up occupying the same semantic territory. Nowadays, most of “wende”’s cognates are gone, but “went” remains. It’s common for such irregularities to form across tense and aspect lines. 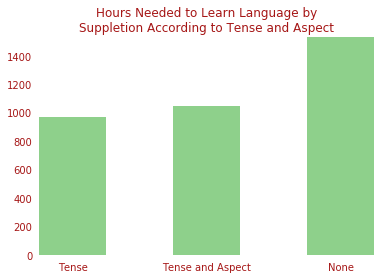 This seems especially suspect to me. Wouldn’t a lack of irregularities make a language easier to learn? Perhaps it does, but those languages which lack irregularities may be unlike English, making them overall harder to learn, regardless. Doing a χ² test on this vs genus, one sees that, indeed, the existence of suppletion is tied to a language’s history.

I suppose there should be a narrative somewhere here, but there isn’t. These languages were not made by thinking gods, and though they manifest through the actions of man, they do not exist by the designs of man. Each is an egregore and such inscrutable entities disdain narration. The best one can hope is that some patterns become clear.

Well, we certainly learned a lot today. Nothing that was definitely true, but, a lot, regardless.