I’ve talked a lot about pairing functions on this blog. I’ve tried using them in a bunch of different projects, but I’ve frequently made the observation that they are often unexpectedly inefficient. As an example, the simplest paring function is just the bit-interleaving function which pairs two numbers by interleaving their bits. Algorithmically, you can’t get much simpler, and the pairing also seems fair in that it packs both numbers equally tightly. For a long time, I thought that was enough, but I’ve come to realize it isn’t. Consider the case of paring a large number with a small one, say 1,000,000 with 1. The binary for both is 11110100001001000000 and 1, respectively. The paired number will be 101010100010000000001000001000000000010, or 365,340,921,858 in decimal. Notice what happened to the size; it’s nearly double that of 1,000,000 despite 1 not having nearly that much information.

This becomes a big problem with iterated products. In recursive data types, it’s often the case that pairings are made between very lop-sided numbers. In such a case, these inefficiencies compound creating encodings for recursive data types which are often much, much larger than expected.

I mentioned the following paper before;

In section 3.2.3 an optimal pairing function is given. Essentially, we just make shells out of equations of the form x * y = s. It’s quite elegant, but it’s not feasible since decoding requires integer factorization. My goal in this short post is to describe a new pairing function that is both optimal and feasible.

To begin with, the information held between two numbers is simply the sum of the bits in both of those numbers. Ideally, a pairing will add a minimal amount of information over that. To that end, an optimal pairing function should send any pair of numbers with the same number of bits to an encoding with a similar number of bits. We can use this to define our shells.

As a bit length function, I’ll use the following;

for some shell s. We can plot these shells using a contour plot;

While these shells may seem a bit intimidating at first, they are actually quite tame. The sth shell has 2^(s - 2) (3 + s) members. This immediately gives us part of the necessary puzzle for our implementation. Given two numbers, x and y, their shell will be

and, assuming we have some function encodeShell which can encode a pair into some canonical position within a shell, we can slide over that position by the sum of all smaller shells to get the final encoded number. Note that;

so we can implement our encoder as

Note that the ss are adjusted to refer to all the previous shells rather than the current one.

In the other direction, if we have a number, n, which we want to decode as a pair, we can figure out which shell it’s in by repeatedly subtracting shell sizes from n until n is smaller than a given shell. To compute this more efficiently, we can note that the inverse of the above sum function is

where W is the Lambert W function, called ProductLog in Mathematica. Using the ceiling of this, we can immediately figure out the shell any given input is in.

the decodeShell function will decode a shell given some canonical position within that shell.

The shells themselves are where things get complicated, though thankfully not too complicated. If we look at an example shell (s = 7), we can note a few things; 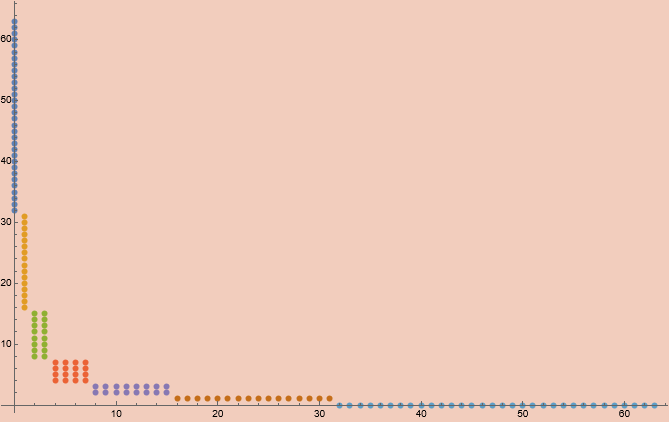 Firstly, we can see two outlying groups of points which have twice as many points as any other group. All other groups have the same number of points. These facts can be expressed by noting the shell size can be reexpressed as;

This shows that the outer two groups are of size 2^(s - 1) while all the remaining s-1 groups are of size 2^(s - 2). Motivated by this, we can split our encoding and decoding tasks into two different tasks, one which deals with the inner groups and the other which deals with the outer groups. Based on this, I’ve decided that the initial numbers in any given shell will be mapped to the outer groups.

The outer group condition triggers when either of the numbers is 0. If it’s in the group which is encoded first in the shell we need to lower the actual coordinate into a canonical coordinate. The outermost families are 2^(s-1) units from 0 so we must subtract that out from the nonzero coordinate to get the position within the shell.

The group can always be identified by the length of the x coordinate. This is because each inner group is twice the height of the next inner group. This leads to a clean way of identifying the group based on the ceiling-log-base-2 of x.

Our goal is to place the coordinate somewhere within a linear ordering of the points within the group. To do this, we can slide all the coordinates down so the group hugs zero. We can do this by subtracting 2^g, which is also the height of the group, from x and 2^(s - 2 - g), the width of the group, from y. If x and y are in the bottom-left corner of the group, this will reduce both to 0. If they are in the top-right, they will be one less than the width and height of the group. We can then represent the linear position within the group as the linear combination 2^g y + x. The position within the shell is then the sum of this with g 2^(s - 2) (the number of inner-group positions before the current group) and 2^s, the size of the outer groups.

Despite all this explanation, the actual implementation is quite simple;

Going the other direction is fairly straightforward;

we can test these functions with a battery of inputs. For example;

This specific implementation isn’t actually that efficient, mainly due to how I used ProductLog. Mathematica evaluates it purely symbolically, but I only need its ceiling, which is efficient to calculate (see below). Beyond that, I’m pretty satisfied with this and will take it into future projects with confidence.

There is a further simplification we could make. If we assume the data is actually a binary string, then 0 is the empty string with 0 bits, 1 is ‘0’, 2 is ‘1’, 3 is ‘00’, etc. We can measure the length of this representation using;

If we draw families of pairs with the same sum of lengths using this definition, we get the same families as before but without the extra long outer families with zeros. We could remove them from the encoding by only considering numbers greater than 0. This means we only need the code for the inner families. We can then get coverage of 0 by simply adding one to the input coordinates during encoding and subtracting one during decoding. Doing this yields;

The main inefficiencies are the ceiling-log and ceiling-product log usage. The ceiling-log is easy enough to replace using a function that calculates the bit-length of a number. This can be done by repeatedly doing integer-division by 2 until the number reaches 0.

we can drop this into our encodeOpt function to get

However, the product log is a more complicated story. W(z ln(2)/2)/ln(2) is the solution to the equation;

The ceiling makes it an approximation to this solution from above. We can characterize our function, which I’ll call clw, via the Galois connection;

We can turn this into a theorem;

here clw will be the skolemization of the existential quantifier in the theorem. If one made a proof of that theorem, the Skolem function could be extracted.

There’s a more simple solution based on some bit-analysis. Note that

This means we can invert this function by looking only at the length. I suspect that, for any number of the form

we’ll have that |n| is, at most, 1 larger than |w|. This is based on the fact that the maximal value of

reached when x = E. Based on that, we can use |n| as an initial estimate and adjust one unit if it’s wrong. This gives us an efficient approximate inverse immediately, however, the naive solution from this isn’t the same as our desired clw. This is more like a rounding function rather than a ceiling function. To turn it into a ceiling function we simply see if the inverse is too small and adjust accordingly.

We can simply drop that in place in decodeOpt to get;

which does the same as before, but without using any symbol manipulation, so it’s now much easier to port and also much faster.

We can observe that the ProductLog portion of the first encoding in this post is the solution to the equation;

We can modify our clw function based on this to

And drop it in place of the Ceilinged function to get an efficient implementation.

Both of the encoding functions have the same asymptotic limit.

in the limit using either scheme. This suggests that

though this is an underestimate. For the first pairing function, I’ve found that

Giving a hard bound for something like bounded arithmetic reasoning. The second pairing function has a slightly looser bound of

Though I’m not sure how to prove these in the discrete domain. They come from taking the limit of

as x and y approach infinity, ignoring the ceiling functions, getting minus infinity. That confirms the second summand grows faster. This also shows the bound to be as tight as it can possibly be as the cases where either entry is 0 will limit to -2 for the first encoding, showing the lack of headroom for any alternative bound. Spot testing is what gets the +1 for the second encoding, so I’m less sure of it.